Is it too late to buy oil stocks as the commodity nears $100?

After producing some of the best returns of the past year, equities are off to a strong start again. crossed $95 a barrel last week, its highest level since 2014, before giving back some of its gains on news that Iran could soon resume supplies as it agrees to a nuclear pact. The commodity traded at $92.85 a barrel in London on Thursday, a 46.4% jump year-over-year.

Similarly, the Vanguard Energy Index Fund ETF Shares (NYSE:) – whose top 10 holdings include Exxon (NYSE:) and Chevron (NYSE:) – has risen 21.7% this year, massively outperforming the benchmark. S&P 500, which fell more than 8% over the same period. The ETF has gained around 48.1% over the past year and closed Thursday at $94.50. 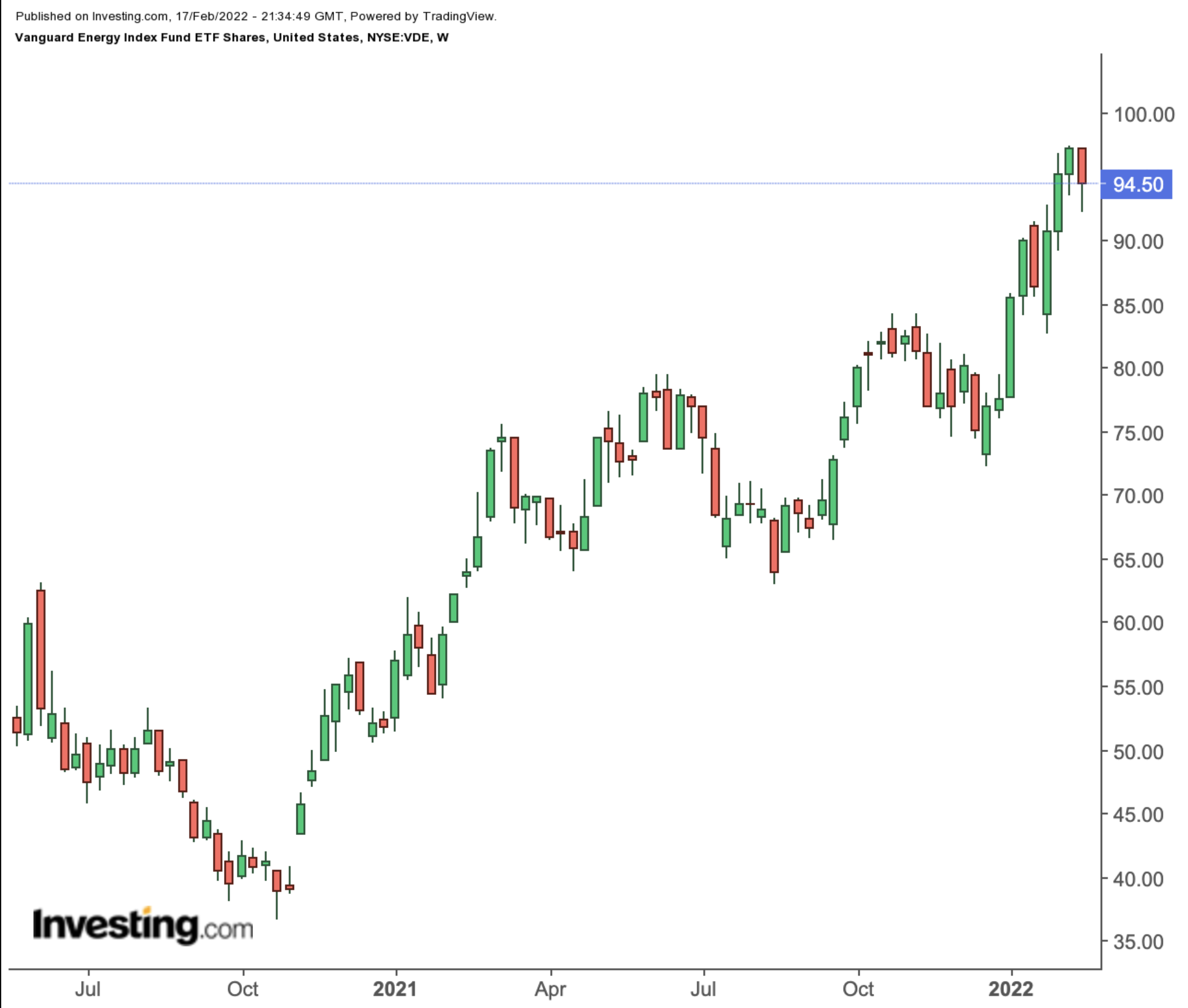 Fueling this powerful run in energy giant stocks is the extremely optimistic outlook for energy markets, propelled by a combination of supply issues, growing and geopolitical tensions.

And it looks like the rally in oil stocks is far from over. Many analysts say Brent breaking above $100 a barrel is almost a done deal, with some now predicting the commodity to break above $125 a barrel.

JP Morgan forecast oil “likely to top $125” a barrel due to tight capacity and lower investment in new resources. His recent note said:

“This underperformance comes at a critical time – and in our view, as other global producers falter, the combination of underinvestment within OPEC+ countries and rising demand for oil post-pandemic ( as Kolanovic et al point out here) will contribute to a potential energy crisis point.

The result of this surprising change in outlook after the destruction of demand at the height of the COVID-19 pandemic is that the world’s biggest oil companies are rolling in cash. Exxon that it made $23 billion in profit last year, its highest total since 2014. Chevron also its most profitable year since 2014, with a net profit of $15.6 billion in 2021.

Investors should remember that commodity markets are extremely volatile and have short memories. In 2020, the energy sector was the worst performing sector in the S&P 500. With the COVID-19 pandemic crushing energy demand and driving prices down, energy fell 37%.

A stark difference in the current oil boom is that US producers are not planning to increase capacity. Instead, they plan to return most of the extra cash to shareholders from dividends and share buybacks.

Chevron raised its dividend this month by 6%, saying it plans to buy back up to $5 billion of its stock this year. Exxon, which generated $48 billion in operating cash flow in 2021, is expected to increase its dividend later this year. The Texas giant said it could repurchase up to $10 billion in shares over the next 12 to 24 months.

Argus Research, when upgrading Exxon to buy, said in a recent note that investors should expect a bigger cash return from the energy giant. His note said:

Exxon closed Thursday at $78.23 after jumping 27.8% this year. Chevron closed at $133.61 and is up 13.8%. While reiterating Exxon as a buy, Goldman Sachs said it liked the biggest US oil producer more than CVX.

“We continue to see more upside for XOM over CVX from a valuation perspective. We see the value of Guyana, Global LNG, Chemicals and the ongoing corporate governance transition is undervalued in the current stock price.

Energy stocks, including XOM and CVX, are in a comfortable position to return more cash to investors after cutting spending and vowing to maintain that discipline even as oil prices continue their upward move.

If the combination of higher oil prices and tight supply persists, investors should see more gains in the stocks of these giants.

Buy falling oil stocks, stay away from everything else

OPEC Will Boost Oil Production: Buy These 2 Oil Stocks If They Go Down