The new Omicron variant of Covid-19 could cost the global oil market up to 2.9 million barrels per day (bpd) of demand in the first quarter of 2022, bringing the total expected demand down from 98.6 million bpd to 95.7 million bpd, if it triggers more lockdowns or restrictions, the Rystad Energy projects.

If the variant spreads rapidly, causing an increase in Covid cases and reintroduction of blockages, Rystad Energy predicts that demand for oil could drop from an expected 99.1 million bpd to 97.8 million bpd in December alone. 2021 – a decrease of 1.3 million bpd. Demand could fall further in January 2022, dropping 4.2 million bpd to 94.2 million bpd.

As countries and governments learn to live with Omicron, or as vaccine manufacturers adapt existing vaccines to deal with the variant, the impact over the entire year is likely to be less severe. Average demand in 2022 would fall to 98 million bpd, down 2.1 million bpd from our current baseline – or “average” – scenario.

By the end of November, the growth in oil demand was so strong that even a coordinated strategic release of oil reserves by major oil importing countries did nothing to quell the uptrend surrounding oil prices. However, after governments went on high alert, the price of oil then collapsed by more than 10%, as the fall in demand is very different.

“The likelihood of an increase in lockdowns in the coming months has increased dramatically due to the new Omicron variant, and this will undoubtedly have an impact on global oil demand. Given the early stage of the variant epidemic and the unknowns related to the contagiousness and efficacy of the vaccine, we can only hope that this scenario turns out to be a false alarm. However, if the risk is real, the oil market will have to recalibrate accordingly, ”said Claudio Galimberti, senior vice president of analysis at Rystad Energy. 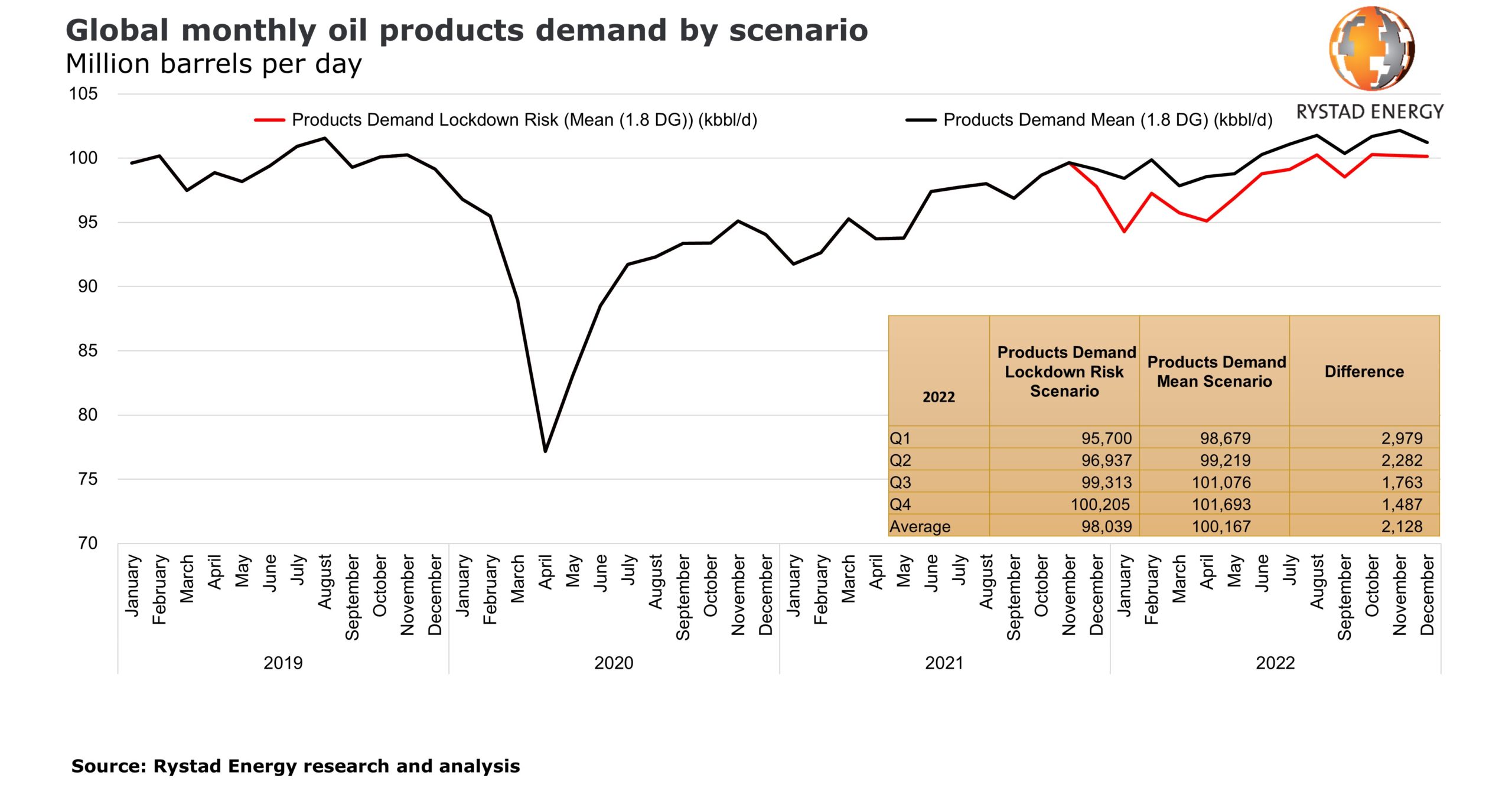 We first introduced the possibility of the impact of a return to containment on oil demand in mid-September. Our first estimates now appear even more probable given the emergence and spread of the Omicron variant in Africa and the associated travel bans from countries with a high workload, not to mention the slow convergence of European countries, starting with Austria, the Netherlands and Germany, imposing mobility restrictions.

The breakdown of the predicted impact on specific petroleum products sheds light on how Omicron could affect different elements of the global economic recovery. In Q1 2022, gasoline demand could fall as low as 1.3 million bpd to 24.2 million bpd, down 5% from baseline levels of 25.5 million from b / d.

It should be noted that the current global demand for oil for road transport, estimated at around 44.7 million barrels per day, is near pre-pandemic levels, accounting for 97.4% of the demand for the corresponding week. in 2019. On the other hand, global aviation oil demand lags behind the equivalent total of 2019 and amounts to 5.1 million bpd, or only 70.4% of the corresponding week in 2019.

Countries and regions have responded differently to the pandemic so far, and we expect this trend to continue with the Omicron variant. For example, countries in North and South America – like the United States, Brazil and Argentina – will likely try to weather the storm and prioritize economic activity. Countries like China and Australia have in the past displayed a zero tolerance approach and are expected to continue this strategy in the coming waves. Governments in Europe and the Middle East are likely to fall between these two extremes as they attempt to strike a balance between economic activity and safeguarding the health and safety of their populations.

Of course, the status quo could change and regional reactions will be dictated by vaccination rates, cultural attitudes towards risk and public sentiment. As with previous outbreaks, restrictions may be driven primarily by intensive care occupancy rates in hospitals and the availability of hospital beds more generally. The pandemic has also affected some regions and countries more than others for a myriad of reasons. Therefore, some countries may need to implement more frequent or drastic lockdowns than before, while others may not be as strict.
Source: Rystad Energy

US Oil Demand Isn’t Great, There’s No Other Way To Tell