The Omicron variant of Covid-19 could cost the global oil market up to 2.9 million barrels per day (bpd) of demand in the first quarter of 2022, bringing the total expected demand down from 98.6 million bpd to 95, 7 million bpd, if it triggers more lockdowns or restrictions, according to Rystad Energy

If the variant spreads quickly, causing an increase in Covid case and the reintroduction of containments, Rystad Energy predicts that demand for oil could drop from an expected 99.1 million bpd to 97.8 million bpd in December 2021 alone, a decline of 1.3 million bpd. Demand could fall further in January 2022, dropping 4.2 million bpd to 94.2 million bpd.

As countries and governments learn to live with Omicron, or vaccine manufacturers adapt existing injections to counter the variant, the impact over the entire year is likely to be less severe. Average demand in 2022 would fall to 98 million bpd, down 2.1 million bpd from the company’s current baseline – or â€œaverageâ€ – scenario.

“The likelihood of an increase in blockages in the coming months has increased dramatically due to the news Omicron variant, and this will undoubtedly have an impact on the global demand for oil. Given the early stage of the variant epidemic and the unknowns related to the contagiousness and efficacy of the vaccine, we can only hope that this scenario turns out to be a false alarm. However, if the risk is real, the oil market will have to recalibrate itself accordingly â€, declared Claudio galimberti, Senior Vice President of Analytics at Rystad Energy. 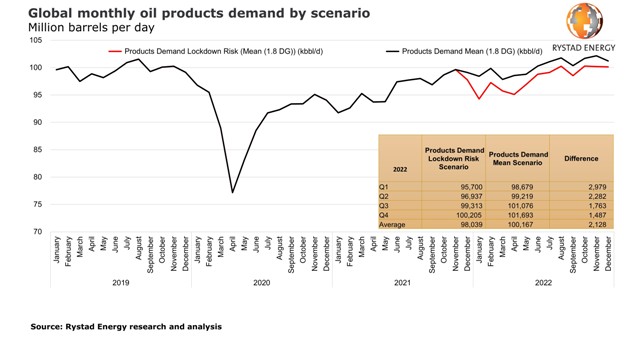 US Oil Demand Isn’t Great, There’s No Other Way To Tell